GANDA PUBLI PRODUCTIONS is a cooperative society established out of a former association named ISPA.

(International Sports Promoting Association). One of the objectives of ISPA, taken over by Ganda Publi Productions, was to put as many sportsmen and women into the picture by publishing (PUBLI) on a regular time basis, as many results of as many sport events possible (mainly in Flanders) .

The PRODUCT of this endeavor was a newspaper named ‘ISPA Results’. Also track and field events (athletics) were organized for Veteran athletes!

GANDA refers to GANDAE to the ancient Roman  name of the city of Gent on the confluence of the rivers Scheldt and Lys.

Sport promotions are also made by organizing and co-organizing runs, joggings and marathons.

GANDA PUBLI PRODUCTIONS has now more activities (PRODUCTIONS) in the world of Sports and Arts with the publications of journals, books and by organizing art exhibitions and auctions and Jazz evenings.

Because of the background of its board members, GANDA PUBLI PRODUCTIONS is also active in many other academic and non-academic activities and projects such as the organization of congresses and symposia but also by giving presentations at sports conferences.

Expertise and technical advice is given to the courts, lawers and judges(mainly in Flanders) and to private companies and individuals mainly to problems and discussions related to agriculture and horticulture, to soils and to plants, to water problems and to the construction of top layers of (grass) sport fields and vineyards. 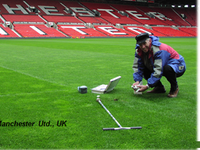